A farmer owned a buffalo which was strong and jet black. He called him “Mr. Blackie”

Mr. Blackie was lazy and the only wanted to eat and do as little work as possible. Every morning, the farmer rode and his back to his rice fields. Mr. Blackie helped him plough his field. After working for several hours under the hot sun, the famer returned home at mid-day to take his meal. Mr. Blackie bathed in his water-hole. Mr. Blackie did not work in the afternoon. The famer allowed him to eat grass. At night, Mr. Blackie self comfortably in a small stable next to the farmer’s house, with a roof over his head. Mr. Blackie, however ran away to eat grass, while the farmer was not looking. One day, Mr. Blackie trod on the tail of a quail which was sitting quietly in its nest in the grass. The quail jumped several feel into the air.
“Cheh! Why can’t you be more careful? You trod on my tail.”
“I don’t care,” replied Mr. Blackie. “You shouldn’t make your nest in my grass.”

Soon the quail and Mr. Blackie were quarrelling and shouting at each other.
“This is my field,” said the quail.
“But the grass in it belongs to me,” answered Mr. Blackie.

The quail kicked Mr. Blackie in the mouth so hard that all his top teeth fell out. (That is why buffaloes never have top teeth to this day)

The quail then flew away. But it could not fly very well because its tail had been pulled off by Mr. Blackie. (That is why quails do not have tails)
Not long afterwards, Mr. Blackie was resting under a tree after a hard morning’s work. It was mid-day and the farmer had gone home. Suddenly, a wild ox appeared.
Mr. Ox was Mr. Blackie’s old friend. He had run away from his owner.
“Why do you work so hard? Why don’t you run away with me? We shall be able to eat grass and play together all day. You won’t have to plough rice fields for that silly old farmer.”
“Where can we go?” asked Mr. Blackie.
“Oh, don’t worry about that,” answered Mr Ox, “I know a secret place in the forest where no one can find us.”

They both ran off together, uphill, downhill, and across stream until they reached a green field hidden deep in the forest.

The farmer looked for Mr. Blackie everywhere. At last, he saw some hoof marks left by him. He followed them into the forest. After walking a long way, he saw Mr. Blackie with his friend Mr. Ox eating grass in a field. Mr. Blackie did not know the farmer was there. The farmer tied a rope with a noose on it across a path leading from the field and went home. When he turned later in the day, he saw that Mr. Blackie had been caught in the noose. Mr. Ox ran away as soon as he saw the farmer coming. (That is why there are still wild oxen in the jungle)

The farmer was very angry with Mr. Blackie, “Is this the way repay my kindness?” he cried. “I’ll tie you up with rope through you’re your nose so that you won’t be able to run away in future.” (That is why buffaloes have a hole through their noses)

He had no more trouble with Mr. Blackie after that. Every morning, he rode on Mr. Blackie’s back to his rice fields. In the afternoon, he tied Mr. Blackie by a rope through his nose to a post in his stable.
————– 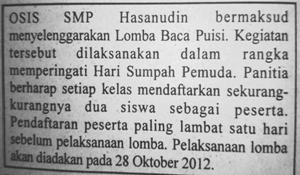